The inaugural wearing of the very large, very soft, very warm big wooly sweater with very long sleeves and detached collar proved once again that strange knittings are very much better than no knittings. And as we sat, toasty on the porch with fizzy wine to celebrate the new job and general excellence of our kids, we noted the dramatic cool down with bugs once the sun set and we felt Fall. RB is a summer-only adventure which means that after twenty-five years, I can manage withdrawal pangs, but come January, longing hits and I look for anticipation reads or watches.

A RB reader mentioned that she chose to anticipate the summer visit with Linda Greenlaw’s Lobster Chronicles, a good choice and a sure voice of Maine. But we porch sitters began thinking about ocean/coastal/water films we knew and loved because, readers all, we decided that books are good but pictures are better. 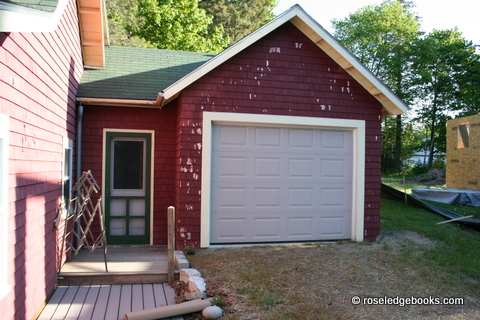 Fig. #92. How about Friday night movies on the garage door? I could enlarge the driveway. At dusk, the peeled paint pock marks look like aging batik.

But which films? Local Hero and The Russian are Coming, The Russians are Coming were unanimous choices. The Shipping News was mentioned and The French Lieutenant’s Woman got a maybe. Errol Flynn’s pirate movies were too violent for one (Remember Captain Blood?) and Johnny Depp’s pirate movies too camp for another. Someone mention he new version of the Hornblower movies which drew a scoff from a Gregory Peck fan. No one had seen Patrick O’Brian’s Master and Commander. Whales of August and Weight of Water were possibles. Only one person had seen the new movie, Ghostwriter, but I can’t remember the comment which suggests the reviewer must have been asleep over the Atlantic when he saw it. Worth checking out, though. The second season of  The Wire is called “The Port” I think, but so far no one had seen more than one episode. Is Baltimore’s port enough water? Jane Austen’s Persuasion should have come up and didn’t. Suggestions welcome.

People of Maine who don’t die at sea or from a communicable disease live nearly forever. I base this finding on a cursory look at tombstones in the cemetery at the head of the Harbor. I think the secret is blueberries. They are so good, so at-hand, and so filled with antioxidants which are good for the heart, how could the finding be different? Seafood is good, too, and available, but not as free for the growing or picking on trails. Is molasses unrefined enough for the resulting doughnuts to be natural or organic? Time for lunch.

You’d better hurry. Labor Day is too close to dawdle.

This entry was posted in General Discussion, North Atlantic Books. Bookmark the permalink.