JULY: THE BLUEST BLUES, THE BEST BOOK EVER AND MORE PERFECT DAYS

Aarrghhh! Plagiarism makes me crazy and again, it is in the news.  Now it’s a Montana senator whose major contribution to his War College Master’s paper apparently was to re-arrange whole ideas from a few worthy papers written by others, mostly available  on the Internet. He didn’t even defend his choice of people to steal from or explain why he chose those particular papers.  He just copied from them, word-for-word with no or inadequate citations.   What is wrong with these people? At least crediting someone else makes you look as if you are one of the band. Not crediting people, especially with ubiquitous Internet access, is just dumb, really dumb, and dishonorable.  Maybe he bought the paper and didn’t know.  Still dumb. 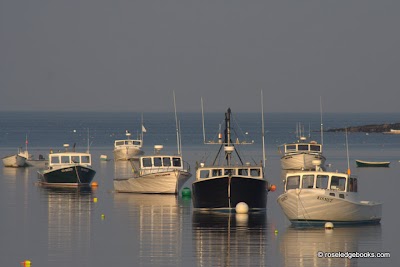 The much more important and very good news is that Roseledge Books’ first two bestsellers have arrived: Food Rules by Michael Pollan, with illustrations by wonderful Maira Kalman and Coaster Days by Roy Meservey.  Each is a great gift book.  Roy Meservey’s journal with pictures of Tenants Harbor during its coaster-building heyday is great for orienting people to the village from the harbor.  Hark! A reason to row the dinghy.   AND Roy Meservey built Roseledge.  Michael Pollan’s three principles in seven words — Eat food; / Not too much; / Mostly plants. — are expanded through useful rules and complimented by Maira Kalman’s colorful pictures of the unexpected. 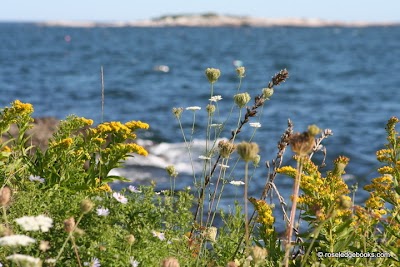 When does a breeze turn into wind?  For  the answer, visit Tenants Harbor this summer.  Whew!  As far as umbrellas staying upright and unbroken, the score is wind 1; umbrella 0.  New, VERY blue umbrella goes up tomorrow, if a storm is not blowing through.  With the bats away and dying of white fungus the wind keeps the bugs away and porch wine events much more pleasant.  I tried to push “Tenants Harbor tapas” with artisan crackers topped by whatever the Produce Lady has, including the just-available native blueberries with RediWhip to hold them on the cracker.  Only the skunk (white cheddar) cheese was a go.  Big wusses.  And wind or no, we had lunch and a very good time on  Miller’s Lobster Wharf which is off 73 and OPEN DAILY.   This Miller’s wharf which is on Wheeler’s Bay  is not to be confused with Cod End which is on a wharf in Tenants Harbor and CLOSED, and currently for sale by a different Miller family. 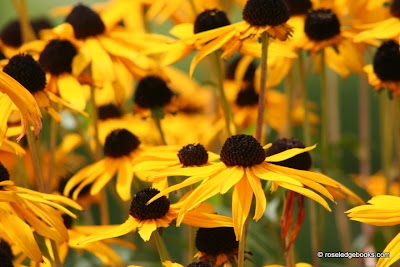 I am reading and loving  Errol Morris’ Believing Is Seeing: Observations on the Mysteries of Photography and it is absolutely the best book ever, well at least until the next best book.  I am only half way through the first essay which addresses Susan Sontag’s mention of two pictures Roger Fenton took  during the Crimean War of 1855.   They are both of a stretch of road called The Valley of the Shadow of Death; one has cannonballs in the road, the other does not.  Filmmaker Morris’ question is which came first and then, why do you think so? The book blurb calls it part detective story and part philosophical meditation; with the what and the why, I call it a search book.  This would be a great gift book for the  curious, for those who want to keep the conversation going, especially those who think they know the truth of a picture.  The tactics, the sources, the dialogue, the observations are all part of it, and what you do with all of it makes the whole.  It is so much fun to like a book this much.

This post has run the gamut from least to most interesting of minds.  Always good to end on a high note.

1 Response to JULY: THE BLUEST BLUES, THE BEST BOOK EVER AND MORE PERFECT DAYS