ONTO WHATEVER IS NEXT

I have been remiss.

Fortunately, cooler days, more agreeable legs, and shame have all set in.

Onto whatever is next.

Maybe it is leaving Maine or living two places or changing neighborhoods or old friends dying or a lifetime of working many places and doing many things , but for whatever reasons, I have been thinking a lot about outsider/insider perspectives.  Who is in and who is out or maybe out and looking in?     Telling about a train trip across Siberia and his resulting book ,Midnight in Siberia: A Train Journey into the Heart of Russia, author David Greene of NPR’s Morning Edition  (10-20-14) noted that as an outsider, he does not understand Russians who not only use, but embrace, the hardships of life — and there are many — to become really Russian, even as they accept the resulting limited opportunities.   But as an outsider, why should he?

As a 30+ year summer person, I am an outsider in Maine with summer friends I enjoy re-meeting each year, and though I’m not sure who the insiders are any more, I  would not presume to understand the why’s  of any of these others with whom I have shared too little.  Like Jim Sterba in Frankie’s Place and Nicholas Kilmer writing about A Place in Normandy, I am somewhere between being a stranger and being a somewhat-familiar, happy with the summers that then happen. 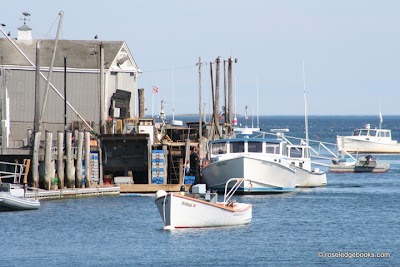 Diana Gabaldon’s Outlander books are being made into a television series on Starz, and though only the first episode was free to non-subscribers, I liked it for its adherence to the books’ overall perspective of an outsider from the 20th C. (Claire) coming to grips  with an insider (Jamie Fraser) and living in the 18th C. (The first book in the series that backs up the first season is titled Outlander; the latest book in the series and still only available in hardcover is Written in My Own Heart’s Blood.)  John Grisham’s novel, The Broker, makes much the same point, as do Ryszard  Kapuscinkski’s essays, Travels With Herodotus.  Clearly, or maybe ominously, one could get carried away with insider/outsider/happy-on-the-threshold issues  and then re-classify a bookstore’s shelves or, worse, one’s life.  So it’s on to apples.

Yes, it’s honey crisp apple time, when I make my annual decision to forego a secure retirement to buy just one more bag of medium-sized treasures at the Farmer’s Market.  Expensive, yes, but, oh my, they are good. Timothy Egan described biting into a honey crisp as having a bit of sunshine in your mouth.  Perfect.  So maybe it is not surprising that I loved the NYT article about the guy who spent 30+ years of his spare time searching out , recording, and now publishing in seven volumes, anything he could find out about the history of apples in North America!  Only the taste is missing; but not to worry, offered John Bunker, an apple grower in Maine, who noted he has the taste, but always wondered where his apples came from (See: Dan Bussey’s Illustrated History of Apples in North America.)  Now I wish someone (preferably the author) would write a book about his thirty-year search for the soul of the apple, so Roseledge Books could put it right next to other search classics like Nicholas Clapp’s The Road to Ubar: Finding the Atlantis of the Sands, Roy Moxham’s The Great Hedge of India: The Search for the Living Barrier that Divided a People, or Roger Mitchell’s Clear Pond: The Reconstruction of a Life.  How someone comes to know something is much more interesting than what that someone decides he or she knows, said the arguer evermore. 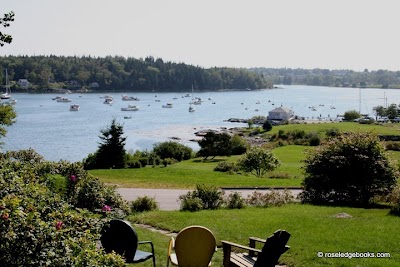 I am reading, and liking a lot,  Lewis May’s The Blackhouse, set in Scotland’s Outer Hebrides and volume one of his Lewis Trilogy..  I have loved the Hebrides since reading Lilian Beckwith’s memoirs/novels of her 20 years as a crofter after World War II, none of which is currently available in paperback.  Sigh.  When they are RB will have them.  But I digress.  Lewis May, though a Scot,  has also written trilogies set in China and France with different detectives, and I like him well enough  to redefine series to include multiple lead characters in the books of one author. Hard to blame authors for wanting a break from writing forever about one lead character, but rest assured that  RB remains committed to finding authors of series by some definition who will bring you back year after year.

Roseledge Books has planted three more blueberry bushes which, if as lavishly filled with berries as the two now flourishing, would provide gnoshing oppotunities for those of you so inclined to pick and eat.  And with thanks to North Carolina Regulars, RB can report that the new rock wall comfortably accommodates bottoms of many heights.

The ever lovely, but over-spreading, rosa rugosa hedge has been cut back to try and gain some control over it, only to discover that the rocks and mixed flora now visible are a new, but fleeting, joy. Pehaps you should plan two trips, the first to see the rocks through the cut back, but handsome, mix of  errant ferns, barbary, goldenrod, and even a rogue maple tree or two, and the second to see, as the landscaper assures me will happen, the rogsa rugsa takeover and reign virtually — or visually — alone.  I heard that Maine wants to declare the rosa rugosa an invasive species.  Oh, no!

And summer person, Ellen, just sent a picture from her neighbor across 131 of Sunday’s snow falling heavily on Tenants Harbor to add to Scott’s mother’s report of 4″-8″ of bush flattening wet snow and power outrages which may last the week.  Here’s to hardy, if short, new blueberry bushes and supple, newly-planted trees designed to entertain the 50 mph wind gusts threatened for today.