With changing appetizers available from the Produce Lady, summer eases into August. Little carrots, sugar snap peas, and native strawberries have passed, but green beans and broccoli florets dipped in cabbage slaw are a new favorite, grape tomatoes are still good but only ’til the sweet little orange jewels ripen on the porch, and wild blueberries are with us again. Of course, it’s a little tricky figuring out how to make blueberries be finger food, but maybe if they are in the cabbage slaw dip, they’ll stick to the dipped.

I’ve been looking for the next best summer read, and so far results are only so-so. Karen Joy Fowler’s Wit’s End is okay, but slow. I think I was looking for the philosophical haunts of Rebecca Goldstein and ended up with the excess daily-Craig Johnson’s Kindness Goes Unpunished ness of an Ann Beattie short fiction I read some time ago in the NY’er. Craig Johnson’s Kindness Goes Unpunished with Sheriff Walt Longmire was a worthy diversion. A reviewer called either Sheriff Longmire or the series “good-natured,” which is true but not sufficient. It is also about long-term friendship, rare, important, and apparently difficult to capture; about Wyoming, as with C.J. Box’s Joe Pickett also, always a plus; and about father/adult daughter adventures. Okay, I’m of an age.

I went back to Wit’s End for about thirty more pages, then skipped to Sean Chercover’s Big City Bad Blood, but found its story focus on the Outfit (Chicago’s name for the Mafia and maybe the Mob, too, though I don’t remember it from the seven years I lived nearby, one year in a house owned by Mob nephews) too limited and his characters not interesting enough, though the P. I. was a reader. So I put it down and went immediately to another new series. This one is by Cara Black and features Aimee LeDuc Investigation and contemporary Paris. I’m reading Murder in the Sentier which, so far, centers on Aimee LeDuc’s search for her mother who left Aimee at age eight and her father and who may or may not have been part of a 70’s radical, revolutionary gang. So far, so very good. I especially like learning, in daily detail, about parts of Paris. I’ll get back to Wit’s End, just not today.

With my summer emphasis on new series, I may be trying to replicate the ongoing, annual pleasure of Julia Spencer-Fleming’s series featuring Chief Russ Van Alstyne and Reverend Clare Fergusson in upstate New York.  Her latest and maybe most worthy paperback in the seriesa is All Mortal Flesh.  Or maybe I’m just trying to be sure Roseledge Books Regulars keep coming back. 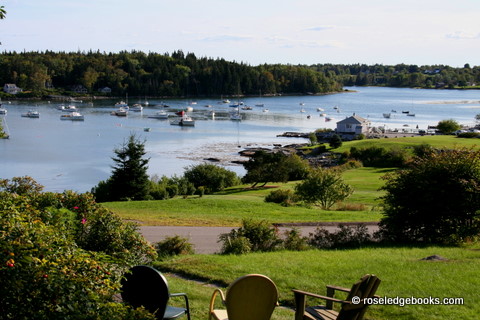 Fig. #59. This summer ('09), Roseledge Books readeristas should probably bring warm socks, a muffler or turtleneck, a second pair of shoes, and a rain poncho or lawn and leaf baggy to make sure a perfect book and a perfect chair result in a perfect afternoon.

LIST ALERT: Here comes another list of Items Ordered.  I inserted it in this post because I’m not sure where else to put it with the blue “order me” covering. Skip it if you are not a list person and note on the webcam that it is foggy, sometimes wet, and two-shirt weather yet again.

Nesbo, Jo.  The Redbreast: A Novel

Johnston, Wayne.  The Colony of Unrequited Dreams: A Novel

Toll, Ian.  Six Frigates: The Epic History of the Founding of the U.S. Navy