MORE FROM THE PRE-POST PANDEMIC

I intended for this post to be posted several weeks ago, but things kept cropping up.  For example, I had the introductory sentence, which connected the disparate ideas.

‘Tis the season to be jolly, grateful, generous, and thinking about things.

That in-be tween time idea reminded me of T.S. Eliot’s quote [from The Rock, 1934]:  “Where is the Life we have lost in living? Where is the wisdom we have lost in knowledge? Where is the knowledge we have lost in information?”   The DIKW crowd added “data”, for unsorted information and “wisdom” for TSE’s “living.”  I  would use the more permeable “learning” instead of “knowledge” and the less conclusionary “to act or to do something” instead of “living” or “wisdom.”  This means that when I am thinking about things, then, I am learning, which is true and worthwhile, because it is what I mostly do.

I should have moved on, but then I found a “thinking about things” ally in Billy Collins. who wrote  [from “The Function of Poetry”]  “Pretty soon, it was lunchtime. / I wasn’t at all hungry / but I paused for a moment / to look out the big kitchen window, / and that’s when I realized / that the function of poetry is to remind me / that there is much more to life / than what I am usually doing / when I’m not reading or writing poetry.  Clearly, he is advocating looking out the window and  thinking about things while living your life [T.S. Eliot], or reading and writing poetry [Billy Collins], or doing a jigsaw puzzle and listening to public radio [me].

Finally, I am getting to my current outrage.  The Seattle Times headline says it all.  The Vikings Firsters are at it again:  “Nordic Museum [new labyrinth]  exhibit recalls Viking influence in Ireland .” 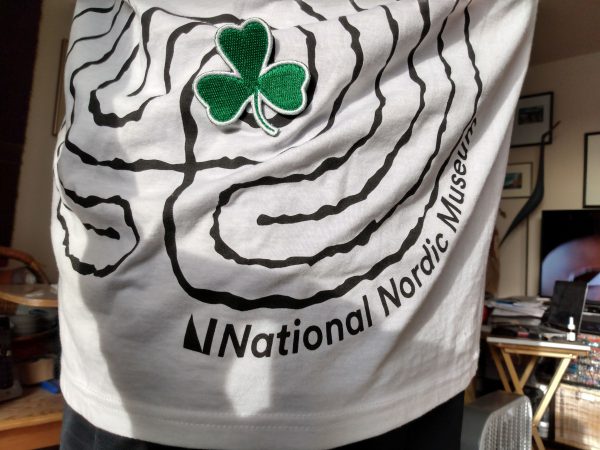 Shamrock dominates labyrinth.  YES!  Now who is the influencer?

The Vikings surely DID NOT “influence” the Irish.  Good grief!    It’s true that the Vikings invaded Ireland, but it’s also surely true that the educated, early Christian, Irish monks who had quietly and long meditated ‘mongst the mazes was unlikely to be “influenced” by the loud, brutal Viking invaders who marauded, extorted and dallied among the lovelies, especially as the invaders made only stone mazes in order to trap [or trip?] their enemies.  If anyone influenced the other, surely it was the Irish monks, who, by or in the 900’s, were tired of the interlopers and who, led by the spirit of St. Brendan the Navigator,  taught the Vikings how to do as they had already done and sail the longer distances to the New World.

Labyrinth justice will prevail, though.  I am going for subtle.  Think “hubris shaming” and check out Charlie in the tee shirt, above.  Now I am trying to find a Banksy-wannabe to spray paint a giant shamrock enclosing the labyrinth that I am tearing up with my speeding wheels in the picture below. 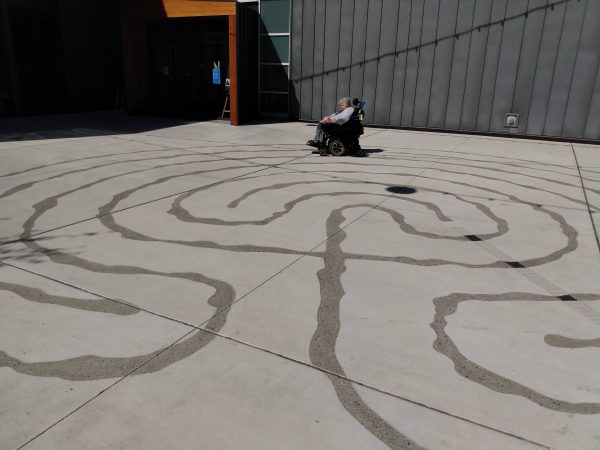 RESPONSES TO COMMENTS, which I love to get, but to which I am the worst  answerer ever.

Several of you, which is legions among my readership, asked for a picture of The Colleen.  Thanks to my brother-in-law, Ralph for taking this picture when last he was walking by.  And Scott says he is waiting for the leaves to fall so that he can get a picture of The Colleen’s long, white-shingle over concrete blocks, windowless side.  With these two efforts, I will surely remain, a Bev noted, the designated-namee of a mystery building.  I think the whole thing is great. 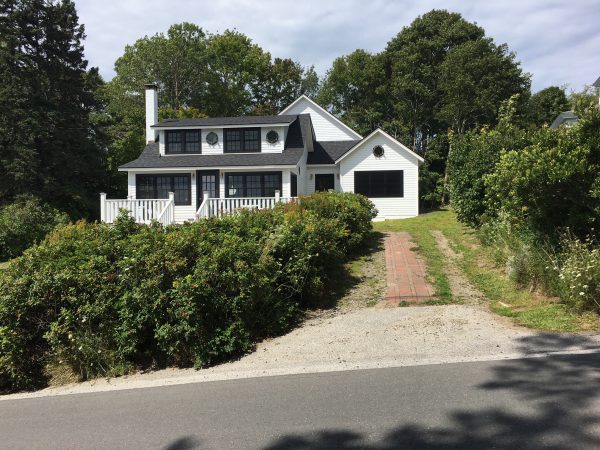 I am still spry of mind, and sometimes opinionated.  The body? Not so much.  But with Charlie and my wheelchair, I do do some and could do  more.

He halts the brewing coffee to bring me a perfect cup.  I sip with pleasure and admit I’m spoiled.   He says I am a difficult person.  Charlie is my godsend.  And long lifers are always an adventure at Ballard Landmark in Seattle.

And finally, in closing:  if you’ve not met Noodle and have no idea if today — or any day — is a “Bones” or “No Bones” day, click here, and have a day brightener.

1 Response to MORE FROM THE PRE-POST PANDEMIC