And, if RB had had a third copy to sell, of
Kai Bird’s Oppenheimer
Elizabeth Zimmermann’s Knit One, Knit All 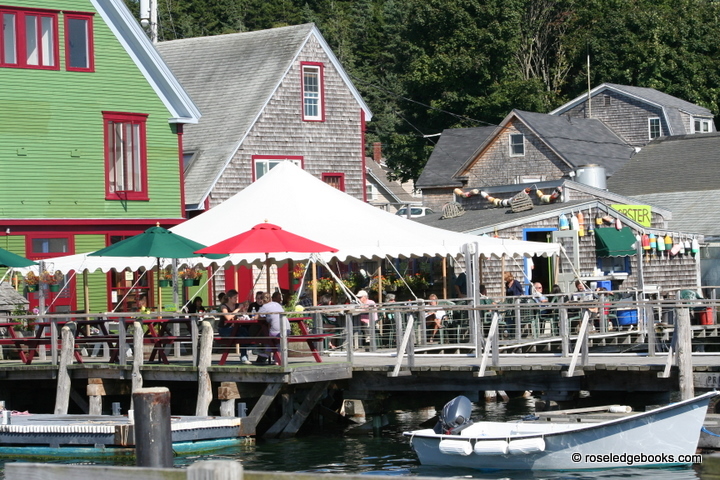 Eating, reading, talking with friends -- the fun of summer by the seaside.

Of course this list does not include those single books sold which were read by more than one person. For instance, a visitor who usually reads fiction bought Ryszard Kapuscinski’s Travels with Herodotus and Madeline Stern and Leona Rostenberg’s Old Books and Rare Friends. Walking by later, her spouse, who usually reads non-fiction, shouted at those of us enjoying the RB porch wine, view, and proximity to walkers-by that he had two new non-fiction books to read. We shouted “Yea” and would have exchanged air-fist-pumps with his wife if we had thought of it. And, he went on, he had just learned that his life would have been better if he had read Herodotus. “There’s still time,” we shouted back. Next summer, RB will be sure to have Robert Strassler’s The Landmark Herodotus for the return visit.

Finally, some “big sticks” (read: tall masts) coming into the harbor and walkers-by enjoying the drying, if early autumn, breeze. I finished Helen Simonson’s Major Pettigrew’s Last Stand; yes, to you who asked, it might be a good common read for oldtimers and newcomers who can’t get along. Readers who like to read about individual books other readers are choosing might prefer Helerne Hanff’s 84 Charing Cross Road and Q’s Legacy or Sara Nelson’s So Many Books, So Little Time to Larry McMurtry‘s Books: A Memoir. I’ve just started Michael Harvey’s The Fifth Floor for my every-so-often Chicago jolt.

Not quite three weeks left. Long sigh. Time enough, if you hurry.