… AND THE LIVING IS EASY

This was the week when special people bought Roseledge Books’ special finds, so RB has the first bestsellers (3 copies sold) of the summer:

Farm Work, a catalog of Jamie Wyeth’s art includes an interview rewritten as if Jamie Wyeth were talking directly to the reader.  It’s the closest thing I’ve seen to an anecdotal biography, much like Richard Meryman’s Andrew Wyeth.

Ray Bradbury’s Green Shadows, White Whale: A Novel of Ray Bradbury’s Adventures Making Moby Dick with John Huston in Ireland has it all for with-it sailors who love movies, Ireland, books and beer and who could never manage to get through the original Moby Dick between fogs. 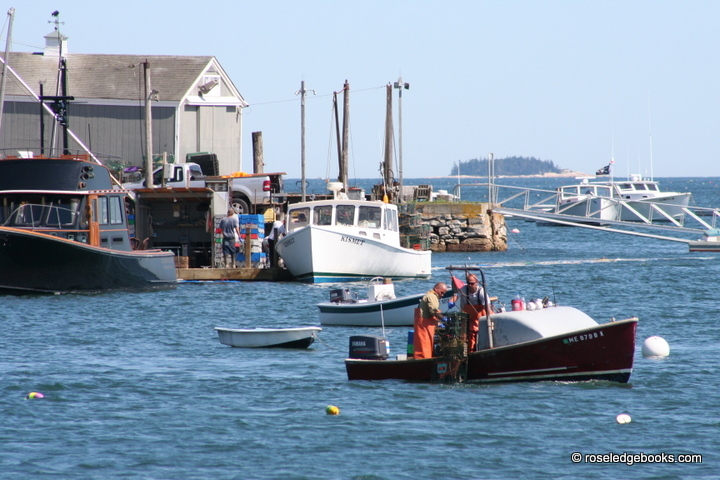 What makes Maine a best seller? Boats and the sea and a memory. Sigh.

One shrewd browser found Lost Bar Harbor by G.W. Helfrich and Gladys O’Neill and knew its pictures would be useful for a biography he was writing about someone not usually linked to Bar Harbor

Two shrewd browsers bought James McCracken’s Innocents at Sea and Charles and Carol McLane’s Muscongus Bay and Monhegan Island as gifts for people who knew the authors or who live in a place included in the book. 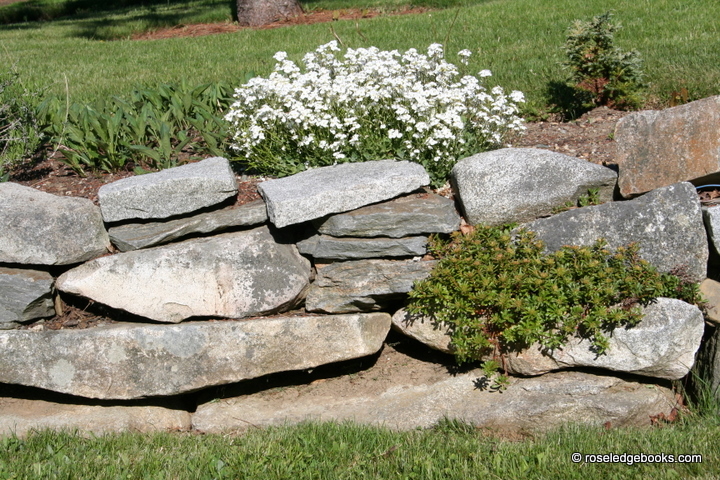 Do you like rock walls? Roseledge Books may have another when you get here.

I’m still looking for new mystery series to ensnare the unwary into coming back year after year to get the latest paperback.  Three earlier finds — Julia Spencer-Fleming, Harry Dolan, and Bruce DaSilva — do not have new paperback editions out this summer, so I’m looking still or again.  Elly Griffiths is a possible, and I’m reading Sara Gran’s Claire DeWitt and the City of the Dead, which I like but know is not for everyone.  A clue: Claire DeWitt is likened to Lisbeth Salander. Suggestions and readers needed.

Business is mostly slow.  More boats in the harbor these days, but still not many compared to summers past.  And the weather!  Take your pick: foggy and soggy or way too hot.  The knees like neither.

Can you see the ripening blueberries on the webcam?  And did you see the eight male goldfinches frolicking in the easily-moved leaves of the rogue poplar?  We checked this morning and Charlie’s forercast beneath the webcam is substantially more cheerful than weather.com, and so far he’s right, although the clouds are thickening.