A blue heron stood between the wharf and the wrecks at mid-tide in front of Roseledge.  It was visible through the webcam if you looked at the right time.

The little kids sailed this way and that in the St. George Sailing School daysailers.

Two light blue sailboats were moored in the harbor at the same time, though one of them might have been gray and, like the water, changed color when the clouds hovered. 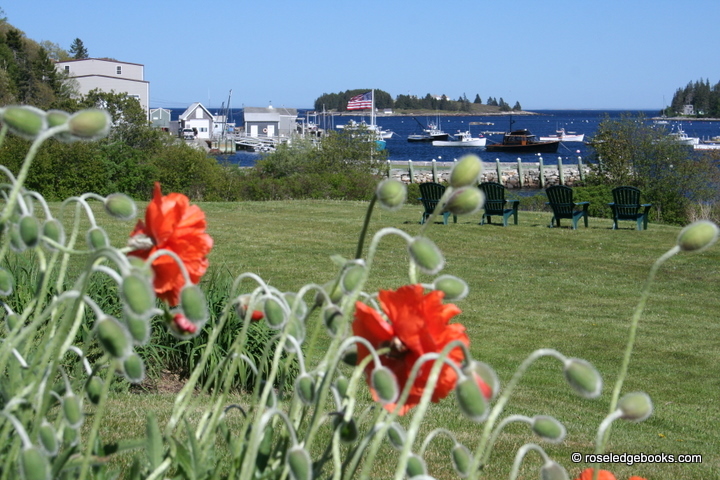 Elly Griffiths, a new-to-me writer, sets her mysteries in a to-die-for place on the salt-marshed coast of Norfolk  and peoples them with appealing characters and plots. I’ve read and liked a lot two so far: Crossing Places and The Janus Stone. A RB Regular pointed out that Dorothy Sayers’ set her wonderful The Nine Tailors in the same memorable fen country.

Two neckless hawks with serrated wing edges flew over the porch this morning as we enjoyed a cup of coffee before nine a.m., after which the sun was too high and hot to be outdoors

Native blueberries are in. Yes, the perfect little wild blueberries that are so good and so good for you.  But don’t hurry to the Harborside Market;  we got the last two quarts on this first day the Produce Lady had them.  Summer joy alert. 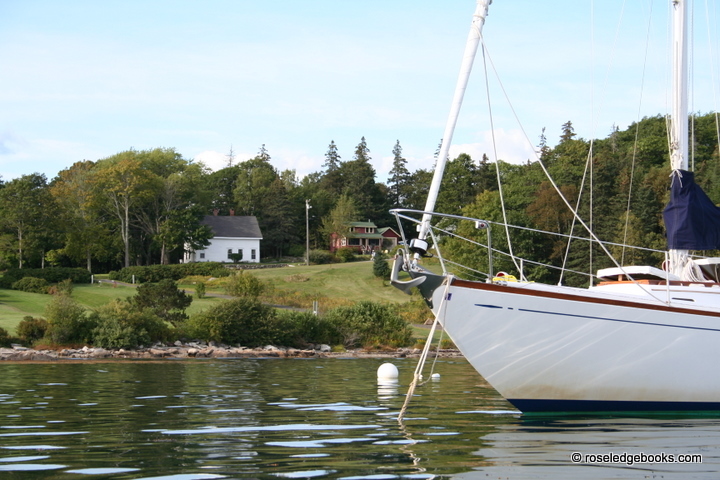 I’m still trying to learn more about the Middle East from those who have spent time there and traveled.  I loved Rory Stewart’s Places in Between which tells of his walk across Afghanistan in winter.  I’ve listened to the news differently ever since.  And I loved William Dalrymple’s mid-’90’s book, From the Holy Mountain, in which he walked the eastern Mediterranean coast to update a 598 A.D. survey of  monasteries  from Mt. Athos in Greece to Coptic Egypt.  It was timely and hugely informative, especially his conclusion that he was unexpectedly witnessing the twilight of Eastern Christianity.   So I thought I would love William Dalrymple’s mid-’80’s book, In Xanadu in which he shadows  Marco Polo on his 13th C. travels from Jerusalem to Xanadu in China. I am reading it and learning a lot which I like,  but it’s hard to read about his Syria of then and not think about the past two years of bloodshed and destruction in the Syria of now.

Maybe it’s time to shift to Farley Mowat’s Otherwise, a memoir of his early years that “shaped his life as a writer and activist” and, I hope, as a sailor and person with a sense of humor.  RB copies should be at the post office tomorrow.