Finally, the last of the order lists.  To make it more intriguing, look for fat biographies, detailed memoirs, journals, logs, or diaries of adventurers in places doing things we know too little about, at least four works with (sometimes remote) ties to Tenants Harbor, more beach, shore, or sea-going works–some with romance or suspense added, books mentioned in earlier blogs,  more Maine books, and, for Roseledge Books Regulars, some re-orders which suggest Roseledge Books may have the beginnings of a canon. 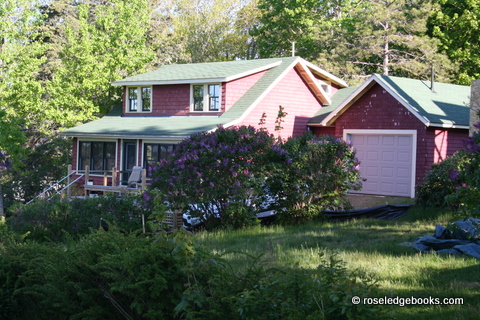 Fig. #55. This is Roseledge Books if you come downhill. The only sign is hanging from the front porch bench behind the rose bush which means you'll only know you're here if you look up the front walk or if you recognize a good time from an earlier visit or from this post. Come soon, get happy, and bring sunshine into this rainy June.

Obama, Barak.  Dreams from My Father: A Story of Race and Inheritance

Petterson, Per.  Out Stealing Horses

Pollan, Michael.   In Defense of Food: An Eater’s Manifesto

Rosen, Jonathan.  The Life of the Skies: Birding at the End of Nature

Ruberstine, Lorne.  A Season In Dornoch: Golf and Life in the Scottish Highlands

Shorto, Russell.  The Island at the Center of the World: The Epic Story of Dutch Manhattan and the Forgotten Colony That Shaped America

Spencer-Fleming, Julia.  In the Bleak Midwinter

Spencer-Fleming, Julia.  I Shall Not Want

Tey, Josephine.  The Daughter of Time

Toobin, Jeffrey.  The Nine: Inside the Secret World of the Supreme Court

Finally, the lists are done.  Now the fun is in discovering paperback treasures already on the shelves and getting cheaper and yellower and harder to find each year they go  unpurchased.  It’s also fun to find the elusive tie to Tenants Harbor.  I  may start with a biography of Teddy Roosevelt to see if he loves North Dakota as I do (possible if tenuous tie) or if he visited with my late neighbor Harry when he visited his aunt who, Harry said, lived next to TR.  So many puzzles, so little time.