I can hardly believe it is raining again, or better, raining still. We are well on the way to 40 days of wet, and the only animals I see to bring on board the ark are two cats, both nifty, both toms. The chipmunks are being decimated as they frolic on the rock walls and natter at the cats. So are the field mice, apparently, though I still cloister my bread. Luckily, the toothy rodents don’t know how sweet the grape tomatoes are, so I can air them uncovered by the stove.

Fig. #56.  Fog is beautiful, mostly, but too much can dampen uninsulated cottages, lobster catches, and even spirits.

Former colleague and old friend Bob just retired, and I sent to his party a memory which resulted in my favorite wine.  I also (finally) sent a perfect “old friends” paperback, chosen in the spirit of his wide-ranging reading and apt nugget recommendations to me during our colleague years. For instance, when Clive Cussler’s Treasure came up, he was the only person who got its appeal to librarians. And 24 hours after I lost my malpractice lawsuit (April, 1987), he recommended Scott Turow’s Presumed Innocent, a just published mystery about the detail of trials, especially evidence, which would have been a whole lot better preparation than the Paul Newman movie, The Verdict, which was all I knew to check at the time. Roseledge Books sent him Christopher Fowler’s The Seventy Seven Clocks, one of the author’s mysteries featuring the Peculiar Crimes Unit of Scotland Yard, perfect for an ever-young problem-solver who wonders how things work and why and who uses his  many and unusual interests to find out.

Are you a nugget reader? Do you read the whole but recall apt bits as the occasion calls for it? I think nugget recall fuels the ability of some people in organizations to be the sought after “stars” of Thomas Allen’s research* into information seeking and sharing. He used sociograms to identify those who were most frequently asked to share information and suggested that these people should be the ones sent to conferences. I think these “stars” possessed nugget recall, just as do good librarians or booksellers who always have or can recall a good source or the right book to answer whatever is the question.

Annie Dillard was skirting the same territory when she wrote (in The Writing Life, I think) of her hesitation to use an anecdote in a story because once written, the anecdote was set in the stone of print and, therefore, lost its flexibility to be apt for telling in many different situations.*  This I understood, as I used to do a fair amount of public speaking and though I could turn one story into many by rearranging facets — or nuggets, I tried hard not to tell the same story in the same way. In  fact, I figured I would be old when I did.  So what was I when I thought the second telling was even better?  Dotage alert. 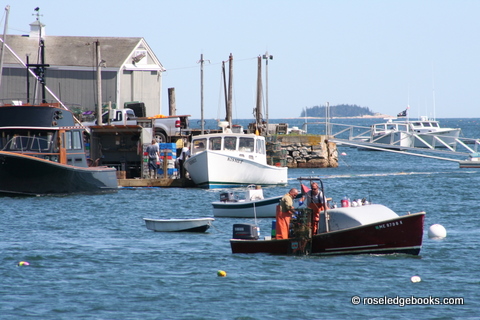 Four exciting points of note: 1) Louise Erdrich may rescue me from dotage-dom in the next post. 2) Nugget readers may also be storytellers or vice versa. 3) Nugget storage and retrieval suggest interesting memory tactics. More on this after I read Jonathan Spence’s The Memory Palace of Matteo Ricci, which Roseledge Books now has.  And 4) The sun is OUT.  On to the porch.

*If I’m wrong about this, please don’t tell me. I prefer to think that someone correctly identified something I was excited to find out.