The pier was new, beautiful, walk-able, inviting, fenced and locked.
It was scheduled to open in FIVE YEARS, when the whole tunneling project would be done.
FIVE YEARS?

Five years is a very long time.  I’m 80 years old in a wheelchair and, although I intend to live forever, you never know.  So I wrote to the City’s Project Director.  I noted the many Seniors in a six-block walking radius, the lack of other places to actually be out on the water, and the City’s efforts to be community friendly and to foster healthy lifestyles.  So why five years?  The pier is finished and though it is needed for trucks to haul the dirt dug up to make the tunnel, how about unlocking it on weekends?  FREE THE PIER!

I got a very nice note back from the Project Director, but freeing the pier was a no go. 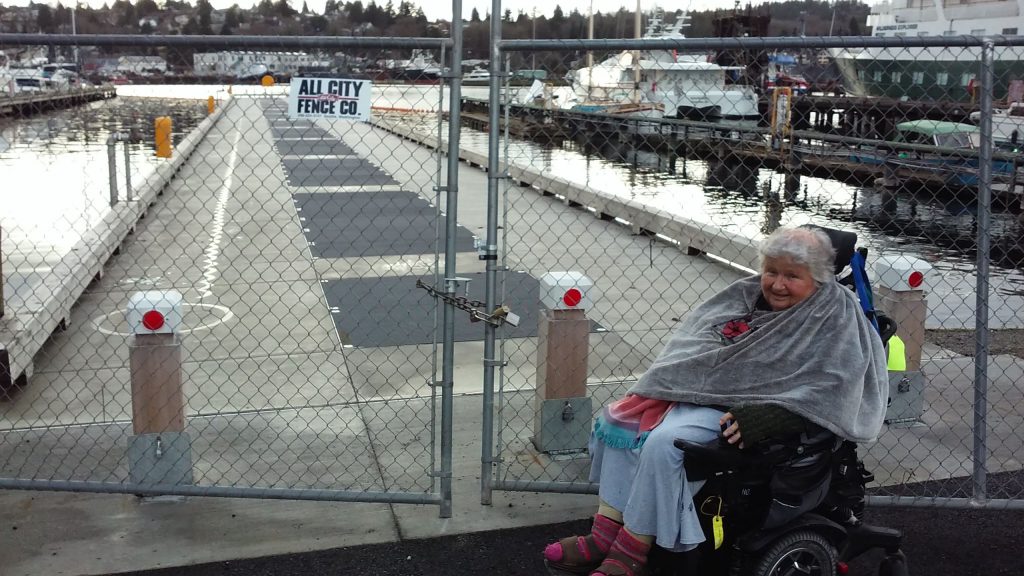 Some weeks later, the neighborhood newsletter named the three local artists hired to invigorate the boring fence.  And I had a thought.  So I sent a second note to the Project Director offering to be a performance artist, sitting on the pier enjoying a latte, reading a “pertinent” book, or just being one with the water.

And several weeks later, he responded.  FREE THE PIER!  (To be continued.)

Ballard Landmark Book Notes:  I read And enjoyed enough of Joanne Freeman’s Field of Blood Violence in Congress and the Road to Civil War to prepare for attending her talk about the polarizing dysfunction and violent incidents of 1850’s Congress leading up to the Civil War.  The current parallels were obvious and many, and reviewers gave the book a rave, in part because of her  extensive research and cited sources.  So I was bound to love the talk.  (She is the daughter of my neighbor and spoke while visiting her mother over Christmas.)

It was a great talk.  She described her purposeful, but serendipitous 17 year search for violent incidents in the secretive Congress, which was secretive much  like today’s Congress is.  Other than C-Span and a still flawed Congressional Record,  how do we know what really goes on when the House and Senate meet?  Dr. Freeman searched government records, family letters of members and the 11 volume journal of the Clerk.  Newspapers, as we know them, were just starting and biased.  But the new telegraph was coming to the rescue.   Introductory Notes and Appendix 2 were about her efforts with information distribution and credibility and searching.

I loved the talk and loved finding her recent, great Op Ed piece in the NY Times.  With her learning, she provided context to note the rightness of Nancy Pelosi’s wonderful speech-shredding and the wrongness of Rand Paul’s public-naming of a possible whistle blower.  She is lively, learned, just a joy, who uses history to make current points and draw pertinent conclusions.  She would be a GREAT commencement speaker.

Right now I’m reading Think of a Number, a mystery by a  new author, John Verdon, whose main character is retired NYPD  Detective Dave Gurney, who lives in the Catskills but with a tie to Seattle.  So far so good, but compelling?  I’m not sure.

Enough, already. I’ll keep you posted on our Crusade to FREE THE PIER.   Every life needs purpose.