JUST IN: A COVID-maybe worker lurks and we are confined…again.

The COVID comes, the COVID goes … up and down, but never away.  Sigh.

Life is Groundhog Day, temporarily sheltering (now,even more)-in-place  Thank heavens for Day Brighteners, like Tim Wu’s NYT op-ed that argues small flour mills may save our economy.   Then he highlights King Arthur and Maine Grains, which calls to mind my ND roots, always a happy thought.

Not to brag because that is unbecoming, but my Non-Partisan-League forbears, in order to make the world a better place for ND’ans and thwart the Minneapolis milling, banking and railroad robber barons, started the still existing State Mill And Elevator and the   ND State Bank, which was recently featured positively in the Washington Post.  A state railroad was planned, but I don’t think it was ever actually born.   My dad’s Coghlan family was politically involved e.g. mayor, county commissioner, 2 or 3 uncles in the state legislature.  Stories abound, and my uncle John, like my dad, a 3rd generation ND’an but not a Coghlan, tried to keep them honest.

So when in 1961 I received a generous wedding gift from Joe Coghlan and did not know who he was, dad said he was his uncle who had served in the ND state legislature.  Then he said, “He must be on the right side of the fence,” which I assumed meant he had switched political parties, but no.  As John explained, it meant he was out of prison.  Uncle Joe apparently defrauded the Federal government, which made him a kind of local hero.  Or so the family tells it.  John smiles.  Anyhow, my dad, uncle John, the Non Partisan League, and ND State Mill were all pluses in my world.  So you go, Maine Grains!

Another Day Brightener  was the flag wrapped folding flag chair Charlie found on sale at Fred Meyer.  This means we can be Pier denizens longer and more comfortably as the other Pier sitters decide if we are Trump supporters, protesters, delayed hippies, or just people with a rolled-up chair in search of a fanny? 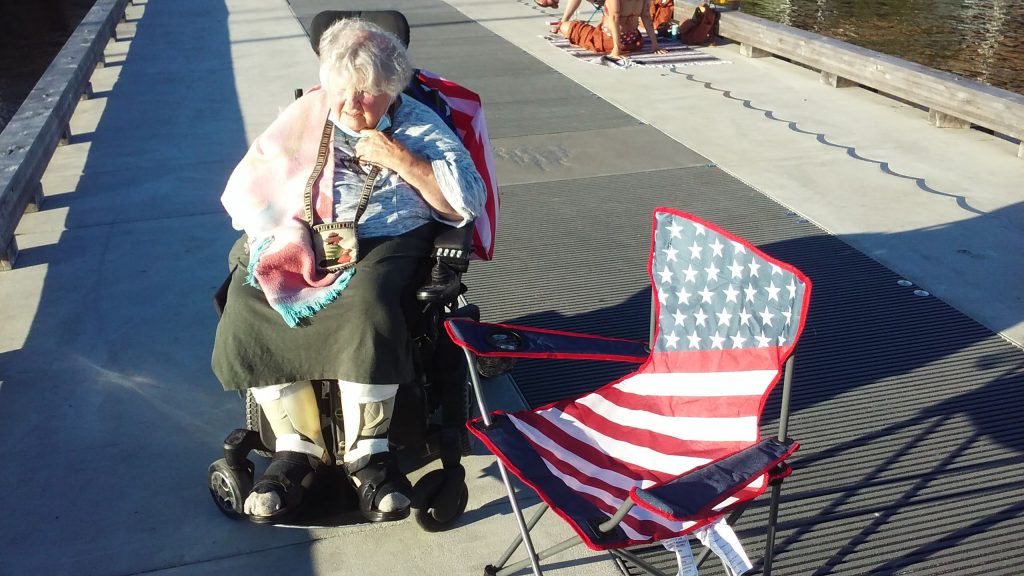 Action shot:  Watching geese moon us and poop at the same time.  I figure, and hope, it was a good, and rare, omen.  I should have looked away.

No, I am not waiting for Godot.  I AM waiting for Charlie to get a phone that can add a selfie stick so you will know we are both here and that  can add the app Starbucks requires when ordering a pick-up latte during the lock down. 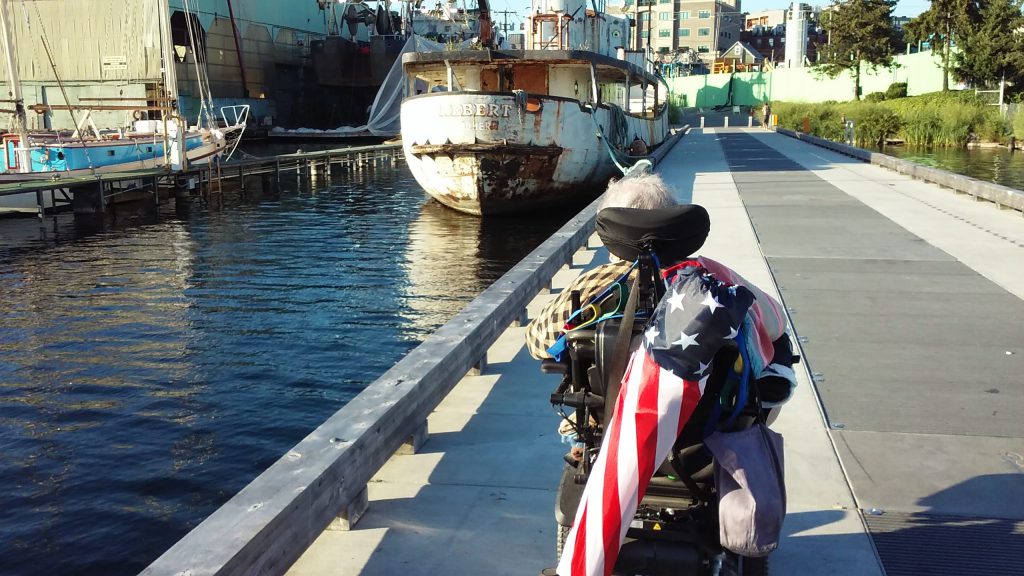 Action shot: Going rogue patriotically or leading the attack on Albert, the junker, from Homer?

REALLY BIG Day Brightener is very  good news that the Pier will stay open after August for at least a time and maybe for always.  Suspect COVID delays are involved.  Here’s to Richard Fernandez, best project manager EVER.

Susan, our ongoing Day Brightener, routinely hands out things to do.  The best so far, IMHO, is Book Bingo, a paper grid with topic boxes, e.g. travel, pets uplifting, in which we are to put summer reading choices.  Five filled boxes across or down means BINGO.

For fun, I filled them all with some title.  I learned that I had to stretch it for pets, animals, sci-fi / fantasy and myth / fable, reword some boxes, and add at least politics, law, occupations, economics, and other people/cultures.  I realized I have read a lot set in the Middle East, but almost none set in Europe.  Interesting tool to see if I remain one with my Liberal Arts world view.

For those of us who check out bookshelves wherever we are, and I suspect we are legion, especially now with mostly zoomed interviews, did you see on Tom Hanks’ shelves transcriptst of 70o hours of secret LBJ telephone recordings?  Is he getting ready for an LBJ biopic, with the tapes and Robert Caro’s person and books, neither of which I actually saw?

And finally, beautiful Vermont from a drone.  Always beautiful, but when looking at nature from a distance, patterns appear and suggest a learning different from a hiker’s, biker’s, or kayaker’s  appreciation.  Lovely, and, good for same ‘ol Groundhog days, engrossing.

And now I am off to the gym for one-on-one pulley work. GO LEFT SHOULDER, pull, pull. Then, with best intentions and some guilt (yes, shame still works), I will post again, sooner.  Yikes..