Weather here was record-setting and almost intolerable for 3 days, but Charlie stretched out on the exercise equipment in the AC-ed  gym and I read (Val McDermid’s latest Karen Pirie mystery, Still Life.) liked it, and wilted  and we survived.  My dad’s hassock fan from the 1940′ s moved a lot of canal breeze and made a lot of noise and the nights were almost good.  Best thing about the 100 degree heat was it made this week’s 80+ days welcome.  Ah-h- h- h!

IDEA ALERT;     So many thoughts, so little tolerance for dragging finger-pads and  resulting typos that lead to emails.  So I am blogging and YouTubing this group email.  Just skip over any ho-hummers and wonder who on earth would be interested in THAT? 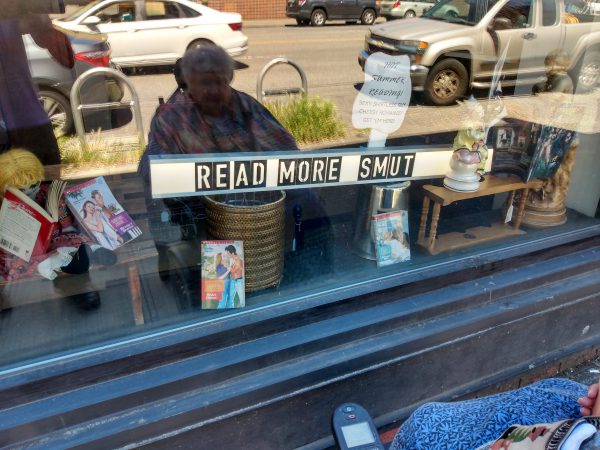 Ah, summertime!  When the days are hot, hot, hot, and so are the books. Sigh.

Some joyful notes or noise:   Two of my NYT faves, Zeynep Tufecki and Siobhan Roberts, with food for thought:

Zeynep Tufecki noted how viruses move, evolve, and spread through scientists, labs, production facilities, testing, delivery, and, finally, guarded captivity, all  within a cloud of government policy and funding.  Life doesn’t get much better than this for a perpetual  student of moving information.    An unexpected but equally pertinent treasure is Errol Morris’s essay on Donald Rumsfeld’s memos which, can support or refute a point, as need for evidence demands   This is good, but nothing beats his book, Seeing is Believing, which is about photographs and perception and the search tactics such an analysis requires.   So-o-o important in this era of screen time and multi- or mixed media reporting.

Siobhan Roberts wrote lucidly, again, about math, this time about MIT ‘s “Artist in Residence” (I love that MIT has one,) and his computer scientist son who make fonts from in this case, a math provocateur’s completed sudoku puzzles.  I love fonts and the colored graphics.

My latest favorite reader is Bill Bratton, former NYPD Commissioner.  His “By the Book” interview reveals a raised, maybe born, reader of all kinds and matters broadly related to policing  He is a lifelong, if varied user of public libraries.  He reads 3 or 4 different books at any one time.  He always finds time to read, especially with his Kindle in his pocket  He  likes murder mysteries, and his favorite detective is Harry Bosch.  Oh my.  Swoon.

I love Nina Katchadourian’s art.   At it’s heart, this mega-mutlti-mediated artist’s work  gathers, sorts and arranges information “into projects that are witty, sometimes even guffaw-inducing. But underneath the playfulness lurk some pretty fundamental questions about how we organize knowledge to make sense of our past and present.”  It reminds me of rearranging my books as each became differently important.  She clearly agrees with my downsized, story-filled art that covers my walls and that, for lack of Larry, is often askew. 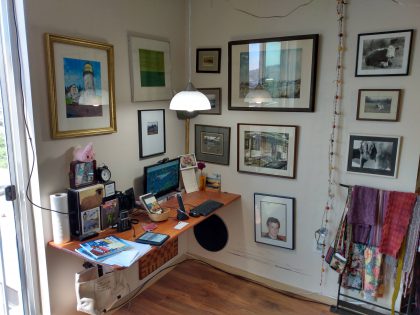 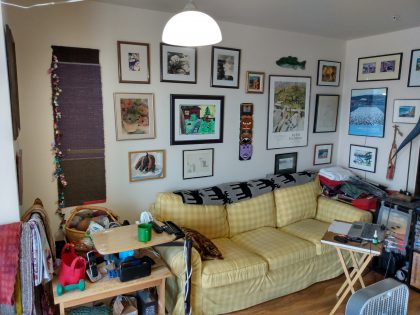 And all with tales to tell.  Vlog?  Charlie, HELP!

Group laughs:  “[P]eople laugh five times as often when they’re with others as when they’re alone.”  Good grief!  I have always laughed alone, especially at my own jokes.  My mother thought it was a good thing and meant I was okay.  I just hope grumpy others don’t use this as an excuse to remain grumpy.

Group think:  What is wrong with people?  ‘The problem,” writes Zeynep Tufecki, ” is that when we encounter opposing views in the age and context of social media,…  [w]e bond with our team by yelling at the fans of the other one….  In an ecosystem where that sense of identity conflict is all-consuming, belonging is stronger than facts.” Arise, I say ARISE, public libraries and share your multi-faceted information and air conditioning with the hot and hungry crowd.  Re-create the independent thinker.  This is your time.

and a livestream picture from my window of the Ship’s Canal (available on my youtube channel), on which something is most likely to occur around weekend midday Pacific Daylight Time, when pleasure boats line up to go through the Locks.

That’s all folks,…well, until next month’s news of note collects.