The ding-dongs are at it again, banning books they don’t like and may never have read.  Stephen King brings it home with a great review of Celeste Ng’s new dystopian novel, “ Our Missing Hearts,” in which, among other  appallingnesses, library books are pulled from the shelves and turned into toilet paper. He says, “On another level, ‘Our Missing Hearts’ is a meditation on the sometimes accidental power of words. Why are Mr. Gardner’s library shelves so empty? Because students must not have access to books that ‘might expose them to dangerous ideas.’ This isn’t dystopian fiction but actual fact, as rancorous school curriculum meetings and protests across the United States have proved. The Florida Parental Rights Bill, signed by Governor DeSantis in March of this year, is basically a free pass to text censorship.”  Gasp!

Libraries are unbanning books!  Of special note is the Unbanned Books Program of the Brooklyn Public Library.  BPL is issuing an e-card to ANY TEENAGER who applies, and with that card any user has access to the 500,000 e-reader titles, free of charge.  New York Public Library is making books available through its SimplyE reader app in a campaign called Books for All. The app is downloadable without a library card.  Thank heavens for Ellen’s good work with technology and networking in NYC classrooms. And Seattle Public Library is encouraging everyone to read banned and challenged books in order to show support for reading, authors, and access. 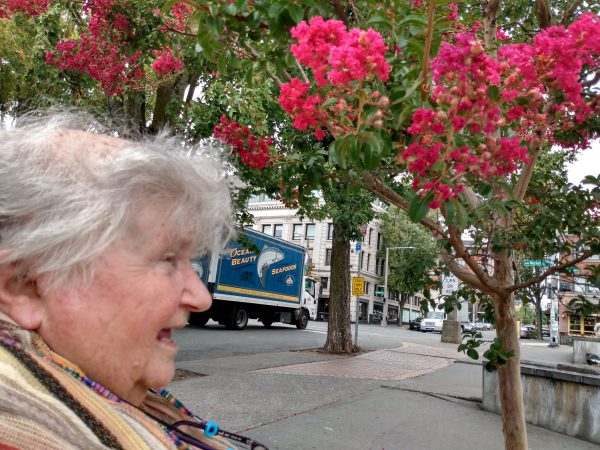 Ode to beings that blossom in the Fall:  We are many, are we you?

What is a book lover, who values freedom to choose and use, to do?             1.Run for your local library board, or guilt other good choices into doing so.  Andy Borowitz accepted an invitation to join his local Library Board in Hanover N. H.  As he explained, “I realized that libraries are now political because people want to keep certain books out of our children’s hands, so if I really want to participate in democracy and not just talk about it, then I had to say yes.” My niece, Susan, in suburban Boston would be great on the Library Board, as would Scott, who is already busy with the Historical Society, Brian, Steve after he moves, or Ann in St. George.

[An aside: With my Kindle 1-click ordering,  which Charlie threatens to dismantle, I just bought Andy Borowitz’s new book, “Profiles in Ignorance: How American Politicians Got Dumb and Dumber” which I will read as soon as I hurry through C.J. Box’s latest Cassie Derwall mystery, Treasure Chest, which is good, but not as much fun as the next best thing promises.]

2.”Intrude’’ everywhere, anytime, to highlight the infinite potential that free access to libraries makes possible.  Putting it less delicately, “butting-in” is one of my major superpowers.  Some examples:

Example:   Millie’s excellent grandson, Magnus, is running for Freshman Class President, using as his platform, a Socrates’ quote: “Democracy is only as good as the education that surrounds it.”  I immediately emailed Millie to be sure that Magnus remembers to note  that “education” means “intelligent voters,” or people who ask  questions [Socratic method alert!] and search for answers [in libraries, etc.], before and after voting.  Surely, Socrates would have agreed if he had lived 200 years later, when the Alexandrian Library thrived.  No reply, yet, from Millie.

Example:  Charlie, lifelong friend Ben, a reader and lifelong party to my suggestions, his excellent daughter, Margaret, and I met just before she became a freshman at Montana State University in Bozeman.  I dived right in and asked her if she used libraries.  She said “Not really,” which I think is polite teenager-ese for “No.” I gasped, took a moment to recover, and suggested she might want to get to know the Bozeman Public Library, in case the Montana State U Library runs out of what she needs [as Marquette U’s Library did when I needed a Shakespeare play. So I went to the Milwaukee Public Library and checked out Troilus and Cressida, not Shakespeare’s best, — okay, it was the only one left on the shelf  — and finished the assignment on time.].  And  being totally with it,  I noted that the Bozeman PL has ebooks.  I casually.  mentioned I would email her some irresistible book suggestions She looked pleasantly unenthusiastic.  I liked her a lot and suggested:  Two of my favorite memoirs: Hope Jahren’s Lab Girl, because Margaret was working in a lab and loving it, and is a probable STEM major; Leanne Shapton’s Swimming Studies, because she is a swimmer; and two good mystery series set in or near Bozeman: Jamie Lee Harrison’s 4 murder mysteries, set in Blue Deer, MT, near Bozeman.  Edge of the Crazies is the first; and C.J. Box’s Cassie Derwall, PI mysteries: The Bitteroots  and Treasure Chest, both with her office set in Bozeman.  Follow-up at Thanksgiving, maybe. 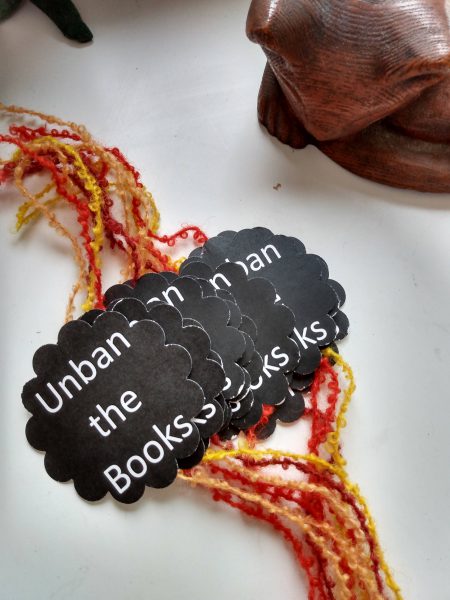 UNBAN THE BOOKS!  FREE THE IDEAS!  Read a book.  Be all you can be.

Example:  At the Poetry Club meeting, I handed out “Unban the Books” bookmarks [Handmade,  thanks to Amy.] to a very modest reaction.  Reilly thought his bookmark said “Urban the Books” [He was once an urban researcher.], which was not okay as it excluded my rural roots.  So we compared who read the most-challenged book while we were in HS.  Well, nobody beats his [D.H. Lawrence’s] Lady Chatterley’s Lover, but I’ll argue that Alan Paton’s Cry the Beloved Country was more dangerous.  So there.  And no one left a bookmark on the table, which I consider a good sign.

Anne, who is in the Poetry Club and convenes the Shakespeare Reading Group, works with Seattle PL to get copies of the chosen play, albeit in different editions, but hasn’t yet run into the banned book issue.  I offered to try to get Shakespeare banned, or at least challenged, at SPL so she and her group could do their civic duty, and read a banned or challenged book.  I lost her halfway through that idea. But the next day, she casually put her “Unban the Books” bookmark on the Ballard HS Librarian’s desk, not knowing that Susan, who convenes the Book Club, was both looking at Seattle PL’s list for Book Club choices and working with the Ballard HS Librarian on a  project to have Ballard HS “teenies” and Landmark “oldies” read  the same book and react to it. Good work, Anne.  I gave Susan my last, first run. Unban the Books bookmark.  Clearly, we are weaving an untangled web.  Any suggestions? 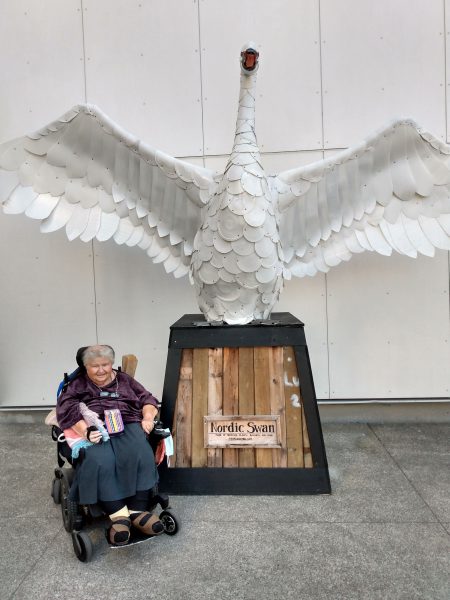 Which is the Nordic Swan?  Only one is made of plastic bucket lids.

On the way to the Lockspot’s cinnamon roll, I rolled on the smoothly black-topped bike trail to familiarize the bicycle riders with the growing number of happy rollers of an age out and about in Ballard and the world.  Okay, there was one little incident.  I mean, who could hear the little ding-ding of the bicycle horn?  Especially with street traffic to my right.  Charlie said I was in the middle of the two bike lanes and wiggling.  I explained it all.  He’s threatening AGAIN to get an air horn, mostly for  my mask violations.

So many civic duties to do, so many a “that’s illegal”  from Charlie.  What’s a civic duty activist mother to do?