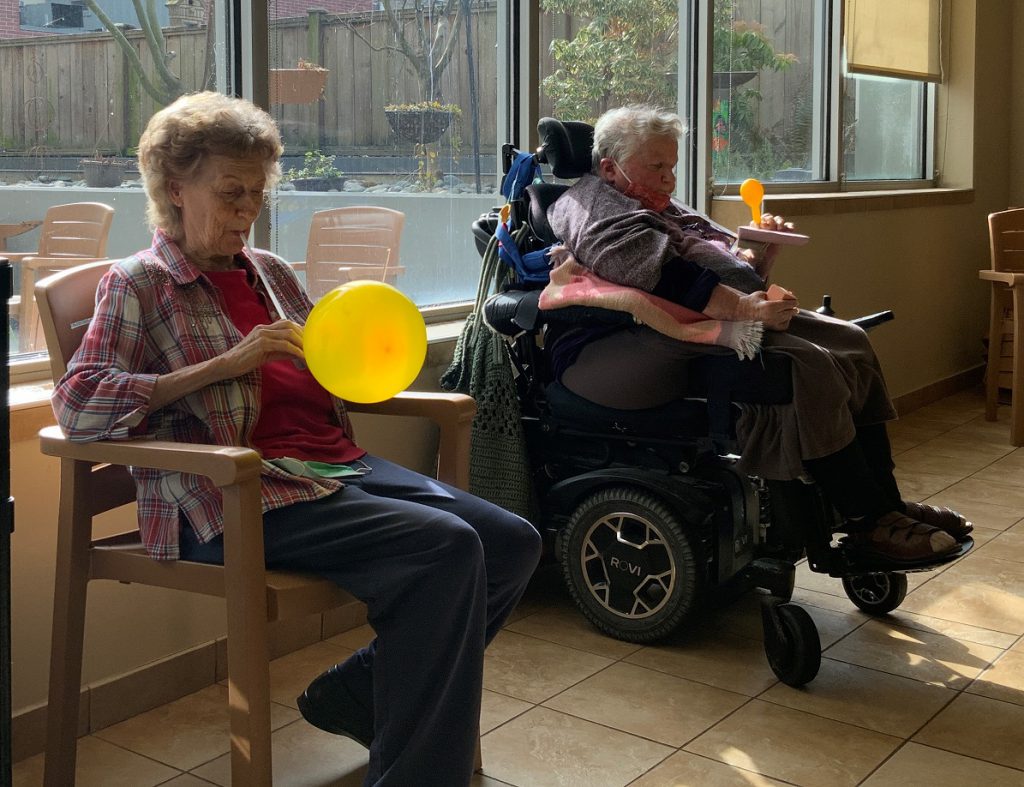 Dee’s boat is clearly hyper. My boat lives the good like, moored, with lattes.

But surprise! surprise!  I’m not filled with hot air, either.

POETRY CLUB IS BACK,  GROWING, AND ALWAYS A GOOD TIME!   With more than 5, but fewer than 10, we literati of the Landmark, led by the unflappable Gary, met on St Patrick’s Day. We were to have found to read three children’s poems. The fuss about Dr. Seuss was in the news and Irish-ness was in the air, so, I chose to read Kermit The Frog’s “It’s Not Easy Being Green” and handed out carefully untouched green gummy frogs.  Both were big hits.

Then, I was in trouble.

I mean, who knows what makes a poem a children’s poem?  I know zippo about what children get or remember from poems written by and read to them by adults.  With much luck and little skill, I found and read John Kenney’s “Quiet Time.”  If my memories of Charlie are any measure and he is the best ever and only measure I have, then Dad-Poet Kenney hit it spot on.  His italics could be Charlie-speak..  And he is LOL funny.

I sort of lost it at the ‘real estate,’ line and the last line.  A Public Display of Uncontrolled Laughter, especially with a Santa belly, borders on shameless,  but fun.  Gary suggested I might want to leave the room and compose myself.  I nodded “No,” gulped some air, and sort of kept on reading.  John Kenney is The Man. 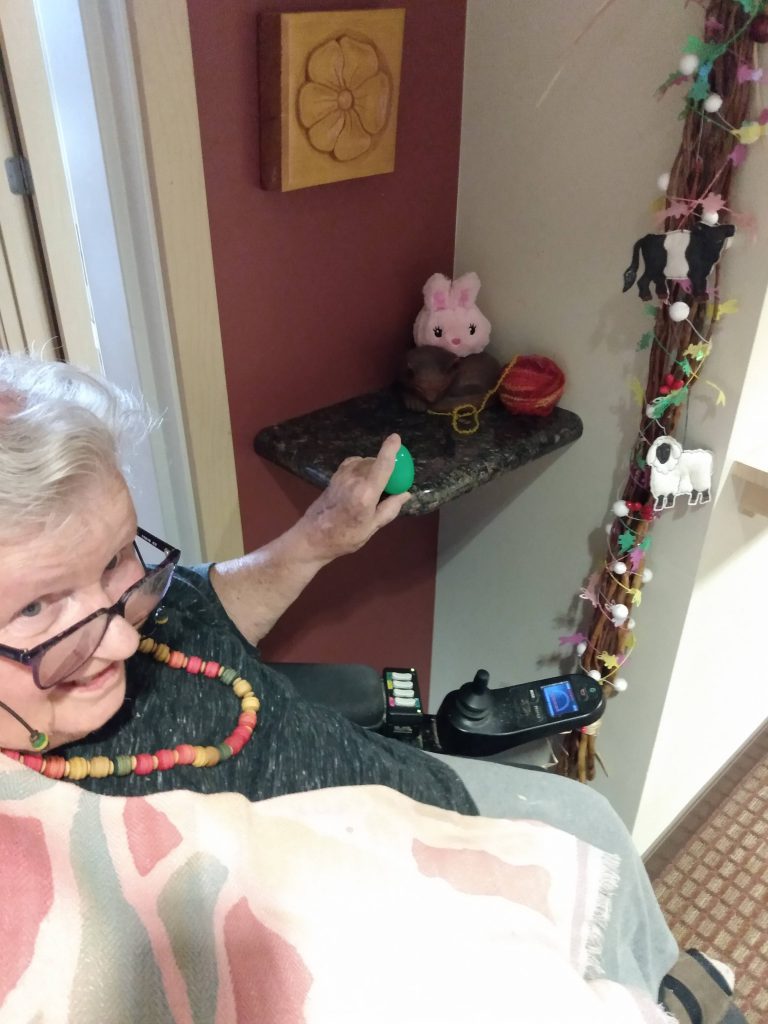 Egg or no egg? Only
bunny and cat know. HAPPY EASTER TO ALL.

Next month “foreign poets” are the stars.  After some discussion,  the concept of a “foreign” poet remains iffy.  Is a foreign poet an alien, weird, or strange or, as Mainers say, “from away?”  Is place of birth key or  current residence and for  how long?  If the poems are translated into English, is the translator considered a co-poet?

Gary changed it to  “Great Poets of the World.”

I knew one fitting poem that I loved, “Possibilities” by Polish born, Nobel Prize winner Wislawa Szymbroska.  Whew!  Finding perfect poems is never easy and only rarely casual, especially as my recent computer dependence calls for a trickiness I am new to.  I knew  “Possibilities,” with its litany of likes and dislikes, from Umberto Eco’s wonderful report of his time in the Louvre, An Infinity of Lists, which I had happened on, knew well and remembered from my page- turning days..

Looking for variety and a second poet, I spotted mention of a murder mystery by Polish-born Nobelist Olga Tokarczuk titled , Drive Your  Plow Over the Bones of the Dead, and thought “Aha! I’ll bet She wrote poems, too.”  And she did.  Cities of Mirrors was her early and only book of poems. Apparently and unfortunately,  only the title was translated, as the book is not available for my Kindle or in Amazon.  This may have been a blessing, because Chapter 1 of the well-reviewed murder mystery about an aging loner’s world, where all animals do or should live respected and respectfully, was a big ho-hummer.  Blame it on COVID crankiness.  So I ordered Wislawa Szymborska’s collection titled Monologue of a Dog and have found several I like for poem 2.

That leaves poem number 3.  W.B. Yeats was suggested, but he was too Anglo-Irish for me, and I like his brother Jack’s paintings more than I like his poems.  Seamus Heaney, another Irish Nobleist was born six months before me [!] and describes marvelously, but I’m not sure he thinks life is worth it.  His poem  “Blackberry-Picking” has both qualities and, so, is just okay, but maybe.  I can choose another Wislawa Szyrmborska poem or sneak in my variation as a homage to the poet and my dead sister, but mostly to my older and only sister.

My sister died unexpectedly in NY and I was mostly chair-bound in Minnesota.  I wanted to have something of our sibling-ness at her memorial service..  So I used “Possibilities'”  litany as an outline of a life, a list of topics the poet and my sister might use to get acquainted — or to be remembered and “Channeling my sister, Charyl Coghlan Pollard, while reading the poem, “Possibilities” by Wislawa Szymbroska” was born.  An excerpt:

Well, she said modestly, it was a hit!  A big demand called for 50 more copies.  A SECOND PRINTING!  YES! 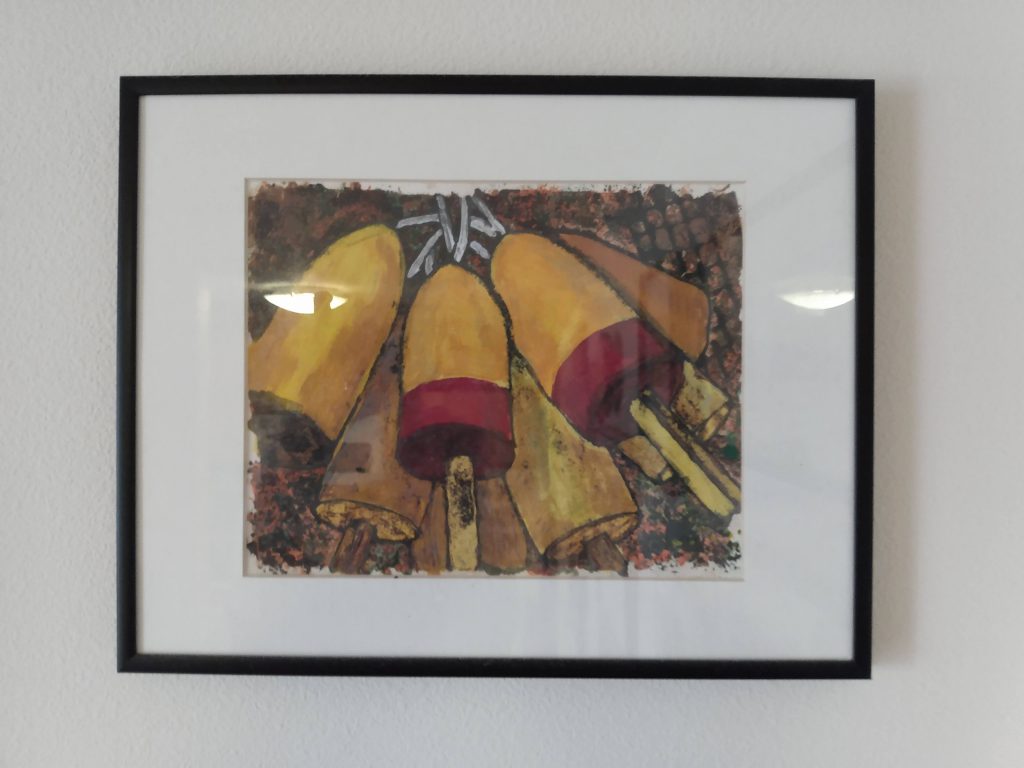 “Lobster Buoys” by Charlie.  Oh, buoy! I love this.  Ignore the glare.

Charlie has been part of my sister’s and his dad’s memorial services.  Ours is now a family of two, and he frets about not knowing enough of or about my stories, but when I, obligingly, try to tell him, the stories either zigzag into a maze of asides, provoke gasping, unexplainable laughter, put me to sleep trying to be organized or all of the above.  “Channeling Conversations” could be an obituary interview outline for family fretters.  I’ll try it out on Charlie and let you know how it goes.