COVID DAYS: EVEN NOW, MANY THANKS

Most significantly, I am thankful for the half of the voters who gave us a generous future and for the other half who, but for a few, didn’t try to kill our democracy.

I am hugely relieved that we we are going to go — eventually — with Joe.  (Refs:  BIDEN BEATS TRUMP! (NY Times)  and WHEW!  (From Scott, who, like the NYTimes crossword puzzle people, misspelled the word as “PHEW!“, but with either of which sentiments, whew’s release of inner tension, or phew’s relief or fatigue, I heartily agree.    (Source: WikiDiff.)  Hard to justify including the following poems here, but I like them, it’s my blog, and I thought the poet might be related to Helene Hanff, whom I love, but she’s not, “ARE YOU AWAKE?” and “WOW!” are “lead-line” poems by Jean Hanff Korlitz from unadulterated Trump campaign emails. Clever idea, bit snarky.)

Then it seemed like the worst of times.  Trump won’t concede, which is horrible all by itself.  Then, I read that half the voters wanted to continue the catastrophe that is the last four years.  AARRGGHH!  Who knew the greed, the hate, and the disdain for reason, democracy, and others were so much among us?

But then, my ever hopeful friends, midst the pandemic, awful Trump Tweets, the slowing of an already damaged economy, the weather extremes, the coming flu season, ill-equipped schools, shrinking worldview, fraying tempers, and invading murder hornets, but then, my friends some glimmers gleam.

Thanks for “legacy media”, for keeping reliably good information moving, especially  the Wall Street Journal editors who kept Hunter Biden’s unworthy emails from taking up newsworthy space and the NYT reporters who wrote about it.

Thanks for intrepid searchers who found nearly 2oo unknown copies of Isaac Newton’s hugely significant  Principles (pub.1687) mostly in Eastern European libraries, suggesting the world of learning was broader and more connected than we thought.  By 17th C standards, Isaac Newton was an international bestseller!  I hope a publisher finds or can make the scholars’100 page report an ENGAGING read, because I’d love to be one with  their travels and search strategies, and an appreciator of their findings about the journey of each book these past nearly 350 years.  Wouldn’t tours of the libraries, archives, and personal collections be fun?  Or how about about “work tours”, somehow enlisting curious and energetic novice searchers, as a kind of archeological diggers?  I intend to have  a hover-craft wheelchair by then, so I’ll be good to go, airline restrictions and the pandemic willing.

Thanks for considerations of  trees, always a gleaming glimmer. Puzzle: Is it always a good time to think about trees, or does thinking about trees make it a good time?  How about making  good memories? From my perch on Roseledge’s porch, I listened long, often, and carefully to see if I could distinguish the types of trees from the sounds of leaves rustling.  After several summers, I could distinguish between cottonwoods and maples, and I knew when the rustling trees were neither.  Too little for two much, you think?  Then your interior life is, clearly, insufficiently rich.

More recently, I walked along Ballard streets with mostly leafless trees, beautiful in their structures, and discovered a found-art tree with fish. 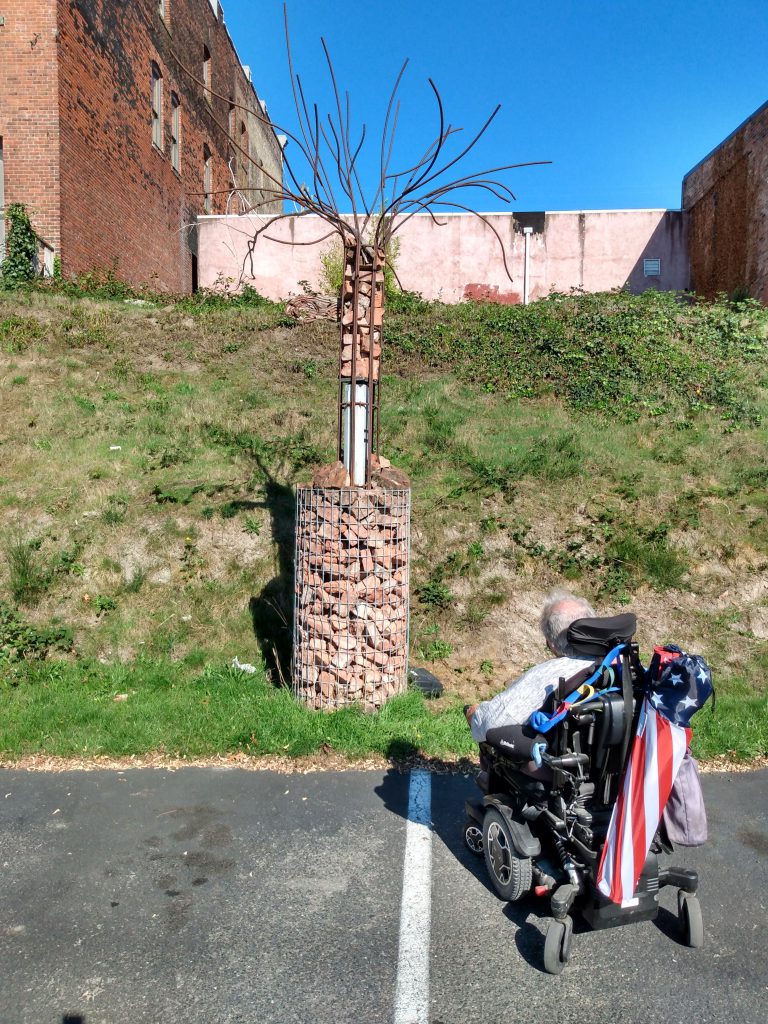 Think Ballard:  found art, trees with or without fish, near dry-docked boats.  Perfect.

For more tree pondering and a shout-out to libraries, love with me Maira Kalman’s paintings of trees and Leanne Shapton’s Sunday walks with trees or, more accurately, tree trunks, sans mention of libraries.  I also love her book, Native Trees of Canada, wherein each page is a leaf from a different kind of tree.  With the book on a bookstand, I turn to a different page each month and enjoy — God and Charlie willing.  Sometimes a miracle would be the faster.

Thanks for Kindle and the 1-click buying option, which I use a lot and Charlie threatens to dismantle.  I promise to talk more, and the threats are no more.  Whew.

Richard Osman’s The Thursday Murder Club is set in a retirement community with residents who interact with each other and the world.  Th book is gentle, generous, good-natured, and sometimes funny, but I was bored and stopped halfway through.  I live the book and would rather learn about new things.

Peter Colt’s Back Bay Blues is small town New England noir, reminiscent of the Tom Selleck/Jesse Stone TV adaptations of books by Robert B. Parker.  I liked the book and learned a lot from the Vietnam War vet thread.

Elly Griffith’s The Lantern Men is her 12th book in the forensic anthropologist Dr. Ruth Galloway series.  I love them all.  Pure comfort reading.

Paul Doiron’s  The Last Lie explores Maine’s north woods, yet another part of Maine I know too little about.  He knows well the outdoor terrain and understands it’s people.  I especially liked traipsing about the landscape with the knowledgeable author

Scott Carpenter’s French Like Moi reports this college professor’s time renting a Paris apartment.  From Kathy’s comments, the tone and adventures sound like those in Nicolas Kilmer’s A Place in Normandy, which I loved and during which he was deciding whether or not to spend the money and make habitable the very old farmhouse his grandfather had bought in 1920.  So I am hopeful.

Thanks again, and always, for good times with Charlie, who, again, declared me a difficult person.  And this was before we wore masks that hugged my eyelashes with each sidewalk bump, of which there are many, and, thus blinded, I was about to cause a disaster and become a public disgrace, and so called,  “Charlie, HELP!” which he did and always does, sometimes with a  VERY LOUD “[sigh]” “tsk tsk” or “Again?”

Finally, thanks for everything better that is just ahead and now possible to expect.

1 Response to COVID DAYS: EVEN NOW, MANY THANKS