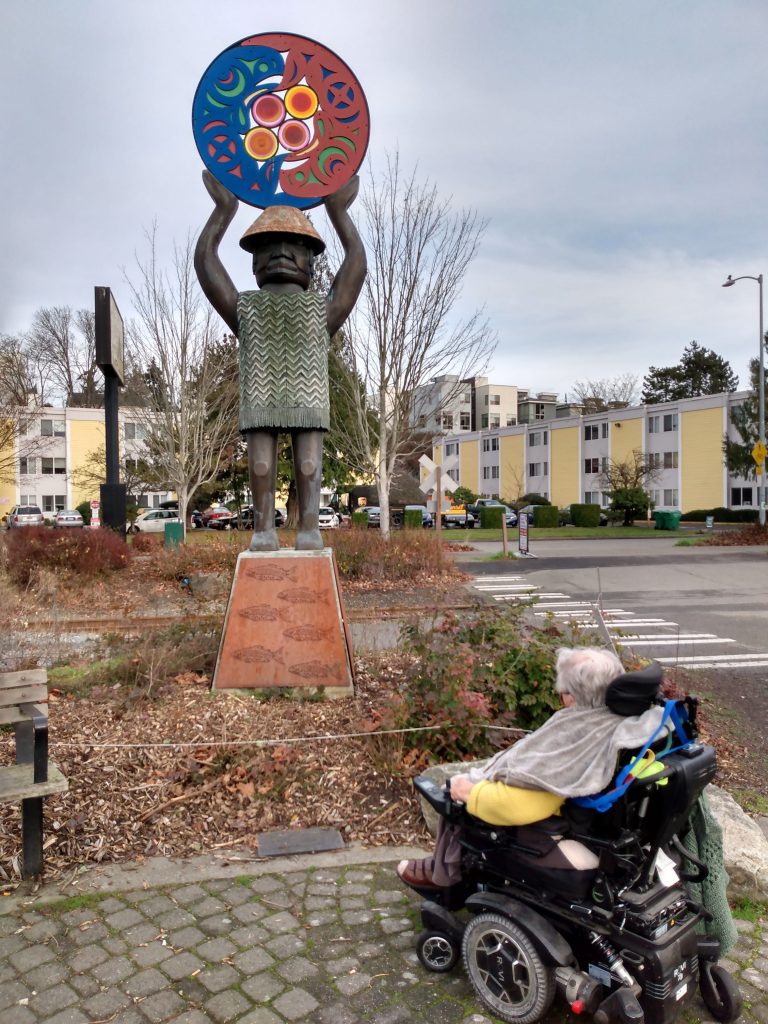 Good news is we’ve made it this far.  We just need to get through the next two weeks of muzzling a crazed loser and his dangerously demented followers, after which civility and competence will again be in charge.  For other millions who are not awful, though often wrong — and sometimes LOUD, there is always valued space at the table for reasonable differences with good governance.  Until then, how about one more listen to Leonard Cohen’s Democracy Is Comin’ to the USA.

But the good news remains: OUR CIRCUMSTANCES HAVE CHANGED!   Welcome to Joe, Kamala, and Georgia Senators.  And if it’s not yet time to smell the roses, it is time to start remembering what the roses look like.  For sure they look like good people doing good things, like the Wakemans taking time to tend the sheep on nearby, otherwise uninhabited Maine islands.  What an upper this article and great pictures is.  Raised in small town North Dakotan, I first met  an island, Baker, in Maine, off Acadia in 1971.  It was love at first footfall on the rocks. I spent some of three summers on Monhegan, and  I might be there still, but I came to learn that rocky trails and cane-supported, increasingly awkward walkers do not mix.  Thus it was that in 1979, I “found Tenants Harbor”, — an island-like peninsula with the Mainers of my dreams and Roseledge cottage — the place and people of my heart for nearly 40 years.  What wonderful “rosy” rlated memories the island sheep-tending article evoked.  But less rosy is remembering that, as on Monhegan, there are limits  that even a willing and able adapter finally has to face to live in a rustic cottage surrounded by uneven, sometimes rocky, largely undiscovered terrain.

So I, very grudgingly, sold Roseledge.  Louis Jenkins hit it spot on in his poem, Football:

I take the snap from the center, fake to the right, fade back…
I’ve got protection. I’ve got a receiver open downfield…
What the hell is this? This isn’t a football, it’s a shoe, a man’s
brown leather oxford. A cousin to a football maybe, the same
skin, but not the same, a thing made for the earth, not the air.
I realize that this is a world where anything is possible and I
understand, also, that one often has to make do with what one
has. I have eaten pancakes, for instance, with that clear corn
syrup on them because there was no maple syrup and they
weren’t very good. Well, anyway, this is different. (My man
downfield is waving his arms.) One has certain responsibilities,
one has to make choices. This isn’t right and I’m not going
to throw it. [Emphasis added.]

So it was that I learned adapting, like reading, had changed from being a hobby to being a way of life.  And now that I’m thinking about being adaptable, I find examples of it everywhere.  One such is Tara French’s The Searcher, which is a novel about a retired cop from Chicago who buys a fixer-upper in the rural west of Ireland.  Both how he adapts as a newcomer and how he adapts his official cop skills to a local problem are key.  From the title I knew I would enjoy Tara French’s book, just as, years ago, I enjoyed Naguib Mahfouz’s book, The Searcher, which was about his search for his father.  I liked his Cairo trilogy more though.  Several other “adapting books” come to mind:  Fishing with John by Edith Iglauer, Frankie’s Place by Jim Sterba, or Lilian Beckwith’s “semi-autobiographical novels set in the Hebrides. 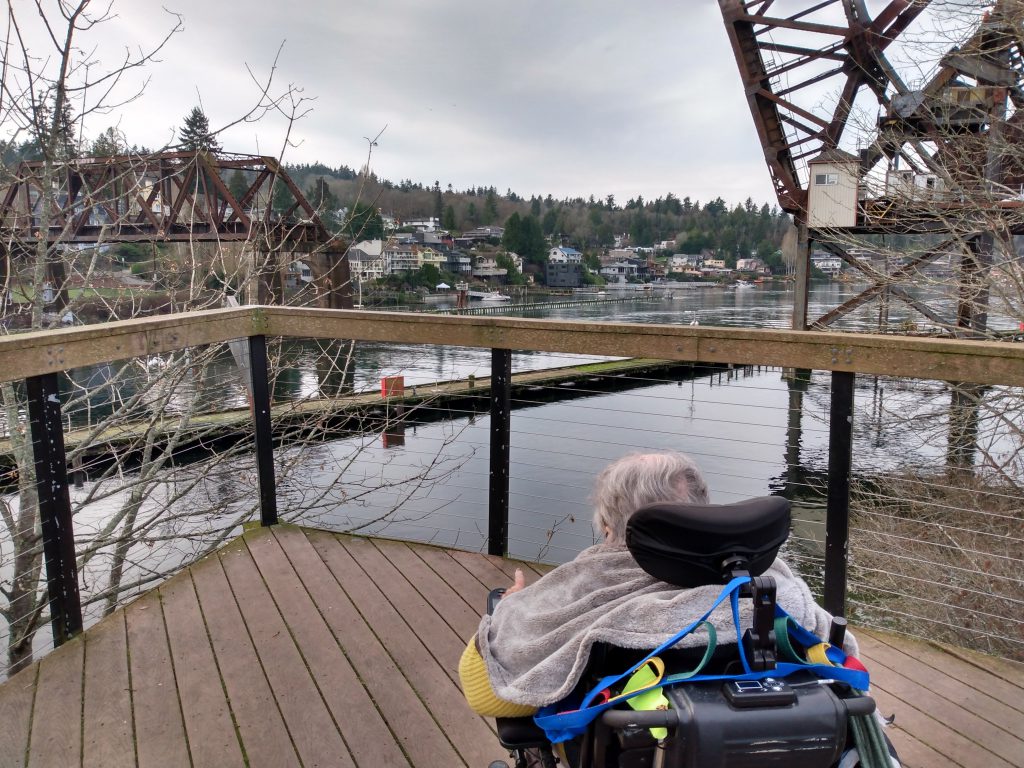 As a long-time major adapter, I have two major enablers:  Charlie, who re-engineers my world to keep me more independent and sassy longer, and Kathy, who keeps me on top of all that matters and fuss free.  Charlie humphs.  He thinks I still fuss.

Charlie helped me turn a great idea, a prairie twig tree, into a Christmas twig tree, which might have won the Best of Floor prize if Mary hadn’t used her end of the hall site for her life-sized, stuffed Santa to sit in a real rocker, by a faux fireplace.  So I turned the Christmas twig tree into a winter twig tree with a faux snowflake tree alongside, but Charlie said “Enough!” when I asked him to fluff the flake-flowers into a ball.  I’m already thinking candy hearts for Valentine Day, but I’m keeping it to myself, for now. 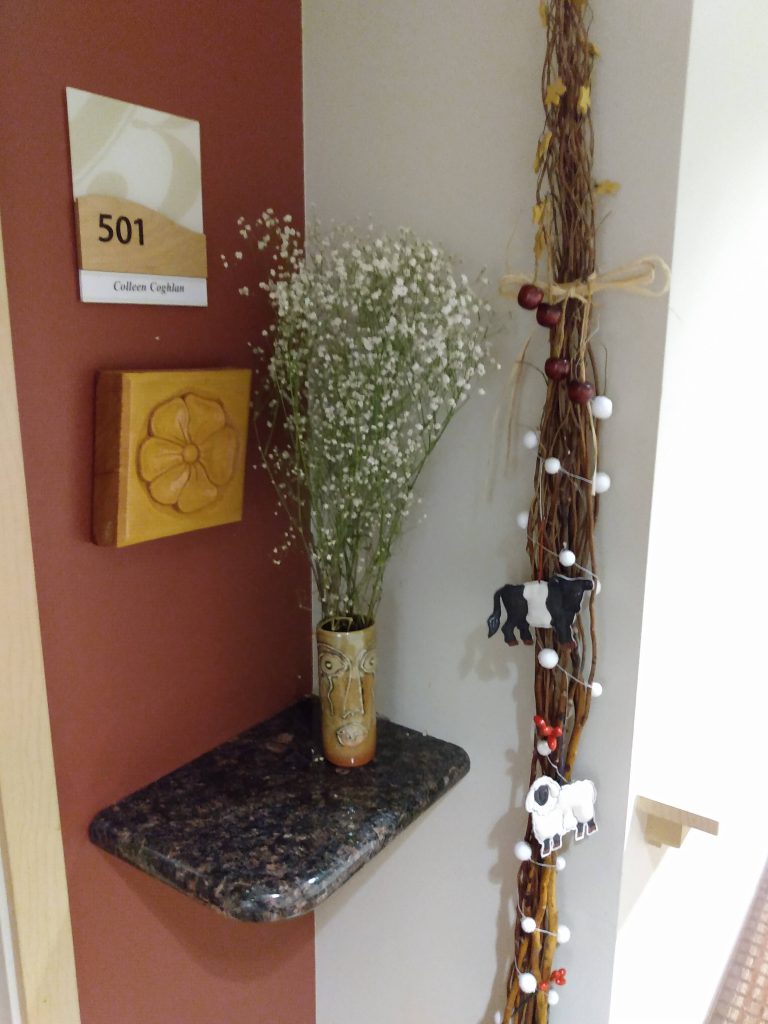 Winter twig tree has memorable, if unfluffed, snowflake-flower tree near.

Kathy knows there are few jigsaw puzzles of a leas 350 pieces that fit the 10″x 20″ lazy-susan top and table that Charlie re-configured for me, so she found and forwarded an           online puzzle site with lots of choices, no pieces to reach for or pick up and lots of shadow-people applauding.  I love it, especially the applause.  It’s easy to play on my Charlie-adapted computer.  Charlie says I’m addicted and neglecting my blog.  He’s not wrong, but   I have no shame.  And you can make a puzzle from your own pictures, which Charlie did.

That’s it until next time, which I am going  to try to post every other Friday.  I’ll have my latest, favorite, jigsaw puzzle report then. 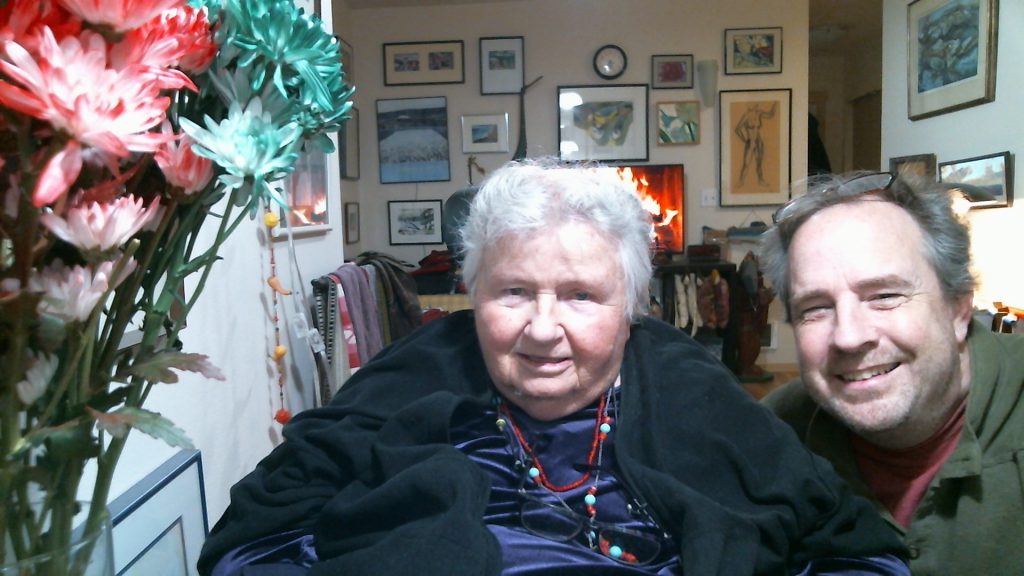 Charlie won’t set my hair on fire. I’ll find better lighting and fuss. Good days and better tomorrows are coming. Join us in making them.

2 Responses to GOOD TIDINGS AND ADAPTING